From ancient roots to modernity Hapkido is one of the few true forms of self-defence practical and relevant for today.

Hapkido – A precise history of Hapkido can never really be established.  While it is natural to seek to understand the roots of one’s martial art, what is important is commitment to and perseverance in training, to develop good self-defence technique and good personal values.

Despite various claims, one should understand that the art of Hapkido was not created or invented by a single individual.   It is impossible for one person to invent an art so vast and complex. Suffice to say that Hapkido techniques have evolved as part of the history of the Korean people over many centuries. 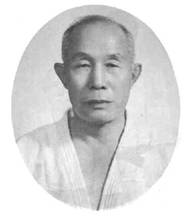 The evolution of the techniques can be traced back as far as 3 A.D. when Korea was divided into three kingdoms called: Koguryu, Paekche and Silla.  Martial arts were developed and practised during this time, primarily for the protection of the royalty/nobles and were also practised by Buddhist monks.

Hapkido techniques have gradually been adapted and perfected in response to the culture of the time. After the end of the Japanese colonisation of the Korean peninsula (1910-1945) slowly Korean martial arts begun to be rediscovered. The name “Hapkido” was first used by Choi Yong Sool in 1958 (pictured above), as a title for the collection of techniques that he had organised into a system.  He combined elements from the extensive range of old Korean self-defence techniques and the philosophies of the Korean people to form the system we know today as Hapkido.

Since then Hapkido has become very popular.   In some cases it has divided into derivatives  with different names, such as Tukong Moosul, Hwarangdo, Hanmudo,  Kuksulwon and Hwarang Moosul just to name a few. Highly respected Grand Master Myung Jae-nam (pictured left) refined a system of Hapkido with dynamic circular motion, called ‘Hankido’.

So what is Hapkido?

Hapkido is a unique Korean Martial Art.  Rather than just sport, traditional Hapkido focuses on self defence training methods as a means for physical, mental and spiritual improvement (self development).

The literal translation of Hapkido is “The art (or way) of co-ordinated power.” Alternatively it is translates as “the art (or way [do]) of harmonising [hap] with universal energy [ki].”  Ki (Universal energy) is the power of nature. The aims of the Hapkido practitioner are two-fold: to obtain healthy mind and body through spiritual and physical development from positive thought and physical training.

There are three elements to Hapkido technique:

While learning Hapkido the student acquires numerous skills such as hand, foot and weapons techniques, together with personal improvements such as positive thinking and self-control.

Hapkido is not limited to punching and kicking like many martial arts.   It is a complete means of self-defence with minimum violence and optimal control of the opponent.  The techniques include joint locks, pressure points, take downs and restraints, as well as the punching and kicking. From the point of view of the ordinary person Hapkido may appear to be only self-defence.  However, the art consists of procedures for both attack and defence.

Hapkido is a suitable means of fitness and self-defence for men and women of all ages.

What is Hapkido? Hapkido is a complete and effective martial art that originated in Korea.  It has ancient roots but continues to be developed by present day masters to be relevant and responsive to the modern world.

Hapkido has developed as a unique Korean martial art with various influences according to the history and geography of the Korean Peninsula. Compared to other martial arts it occupies the middle ground between soft styles such as Aikido, Judo, Jiu Jutsu and hard styles such as Karate, Taekwondo, and some styles of Kung fu.

Including defensive and offensive techniques, Hapkido training develops skills and confidence to deal with any situation. Additionally at senior levels students have the opportunity to study traditional weapons such as the cane, fan, staff and sword.

Korea and World Moomookwan Hapkido Association (KMMKHA), founded in 1963, is the oldest modern continuous Hapkido school, and has become one of the world’s leading Hapkido schools and federations. As a world leading

Melbourne Hapkido Academy welcomes any other organisation, school or student to contact us to join Moo Moo Kwan.

Melbourne Hapkido Academy roots began when Grand Master Craig Cairney started martial arts training at a young age in Wollongong NSW. He began Taekwondo training in 1979 and established a branch in the area by 1989.

안녕하세요
And in a flash he is down… technique practice.
핲기Hapki …

안녕하세요
School holidays are about to start and Christmas is nearly with us. We all will need a break to spend time with our family and friends. Please find below our Christmas and January summer holiday’s timetable.
martialartsmelbourne.com.au/
핲기Hapki …

We use cookies on our website to give you the most relevant experience by remembering your preferences and repeat visits. By clicking “Accept All”, you consent to the use of ALL the cookies. However, you may visit "Cookie Settings" to provide a controlled consent.
Cookie SettingsAccept All
Manage consent

This website uses cookies to improve your experience while you navigate through the website. Out of these, the cookies that are categorized as necessary are stored on your browser as they are essential for the working of basic functionalities of the website. We also use third-party cookies that help us analyze and understand how you use this website. These cookies will be stored in your browser only with your consent. You also have the option to opt-out of these cookies. But opting out of some of these cookies may affect your browsing experience.
Necessary Always Enabled
Necessary cookies are absolutely essential for the website to function properly. These cookies ensure basic functionalities and security features of the website, anonymously.
Functional
Functional cookies help to perform certain functionalities like sharing the content of the website on social media platforms, collect feedbacks, and other third-party features.
Performance
Performance cookies are used to understand and analyze the key performance indexes of the website which helps in delivering a better user experience for the visitors.
Analytics
Analytical cookies are used to understand how visitors interact with the website. These cookies help provide information on metrics the number of visitors, bounce rate, traffic source, etc.
Advertisement
Advertisement cookies are used to provide visitors with relevant ads and marketing campaigns. These cookies track visitors across websites and collect information to provide customized ads.
Others
Other uncategorized cookies are those that are being analyzed and have not been classified into a category as yet.
SAVE & ACCEPT